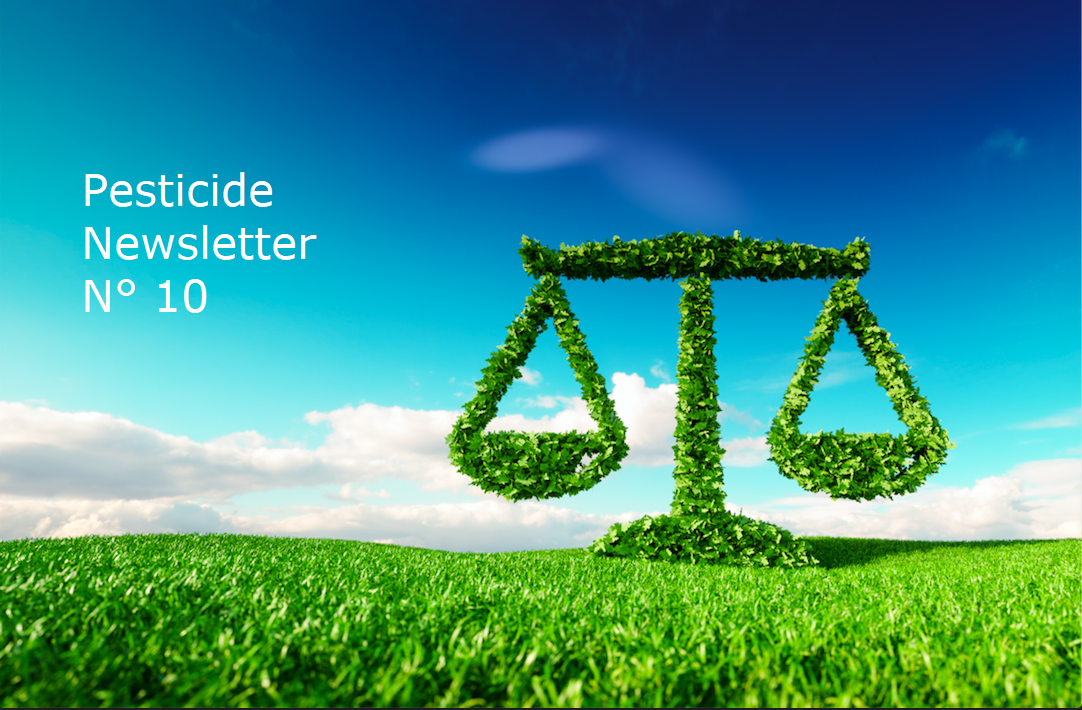 This tenth newsletter looks back at the news of the last few months related to pesticides. The consequences of these toxic products affect every country in the world, and the information in this newsletter includes Argentina, Brazil, the European Union, France, Germany, Guernsey, India, Italy, Mexico, Switzerland and the United States.

You can also make a donation to support Justice Pesticides’ outreach work.

On September 14, the European Court of First Instance ruled in favor of the association Pollinis France, represented by Justice Pesticides President Corinne Lepage and her colleague Théophile Bégel, against the European Commission.

­On August 19, Bayer AG CEO Werner Baumann was called to testify for the first time in one of the Roundup lawsuits, despite the group’s fervent opposition.

EU: PAN Europe files a complaint against the renewal of the authorization of cypermethrin

­On August 31, our partner, PAN Europe, filed a lawsuit in the European Court of Justice against the reauthorization of cypermethrin.

­In September 2022, the 2019 – 2021 status report on Swiss waters, conducted within the framework of the international “Water and Health” Protocol of the United Nations and the WHO, was published.

­On September 6, 2022, the Washington Court of Appeals granted a claim by five Washington farmers whose raspberry crops had been severely damaged by the use of the herbicide Callisto, despite their compliance with the product’s label instructions.

­On September 29, 2022, the U.S. Federal Trade Commission and ten states filed a complaint in federal court in North Carolina against pesticide manufacturers Syngenta and Corteva for violations of competition law.

U.S.: In Washington, the District asks for the repair of the environmental damages caused by chlordane

­On October 13, 2022, the District of Columbia filed a lawsuit against the agrochemical company Velsicol for the environmental damage caused by one of its products, chlordane.

­Numerous news reports from different French regions have recently shown that tap water is contaminated with pesticide metabolites throughout France, even prompting authorities to suspend its consumption in some cases.

Colombia: End of aerial spraying of glyphosate on illicit crops

In accordance with the decision of the Colombian Constitutional Court, the director of the Colombian National Police, Henry Sanabria Cely, ordered on August 23, the immediate suspension of aerial spraying of glyphosate to eradicate illicit coca crops

EU: Glyphosate authorized for another year

The European Commission has decided to extend the provisional authorization of glyphosate until December 15, 2023, despite the controversies surrounding the substance.

­Seresto flea and tick collars have been the subject of more than 101,000 incident reports since their marketing authorizations in 2012, or nearly 25 reports per day for the past 10 years.

Chlorpyrifos, methomyl, and paraquat, three highly dangerous pesticide active substances, are now banned in Chile as of an October 7, 2022 resolution adopted by the Chilean Ministry of Agriculture.

France & EU: The risk assessment of pesticides does not take into account cocktail effects

­On November 7, the National Commission on Ethics and Alerts in Public Health and the Environment (cnDAspe) issued its opinion following the referral “Chronic under-assessment of the toxicity of pesticides in France” by parliamentarians and the NGO consortium Secrets Toxiques.

­Costa Rica: Ban on fipronil for professional and industrial use

­In Costa Rica, the use of the insecticide fipronil was banned by a decree (No. 43767-S-MINAE) which came into effect on November 11, due to the unacceptable risks that this substance poses to pollinators.

EU: How the agrochemical industry and member states are defeating pesticide regulation

Pan Europe has published a report entitled Pesticide paradise, which traces the history of the 278 times failure of the European legislator, since the adoption of the Reach Regulation to remove “Candidate for Substitution” pesticides […]

On September 26, 2022, our partner Center for International Environmental Law (CIEL) published a legal opinion on the export of pesticides banned in Europe (European Union, Switzerland and United Kingdom) to Africa and Central America.

Canada: Citizen Opposition to Glyphosate for Human Health and the Environment

Residents of North Mountain in Annapolis County, Nova Scotia have been victims of aerial glyphosate spraying for many years and have been calling on local governments to stop the practice.

Toxic chemicals known as per- and polyfluoroalkyl substances (PFAS) were detected in seven out of ten insecticides tested in the US.

EU: “Save the bees and the farmers” will be the 7th European Citizens’ Initiative*

The European Citizens’ Initiative has reached the one million mark in declarations of support from European citizens, as the European Commission admitted on October 10.

New version of the Pesticide Atlas

­A new version of the Pesticide Atlas, published in English, is available since October 18, 2022. It is the result of a collaboration between the Heinrich-Böll-Stiftung, Friends of the Earth Europe and PAN Europe.