EU: A new campaign from PAN-EU denounces the increasing presence of 55 most harmful pesticides on the EU market 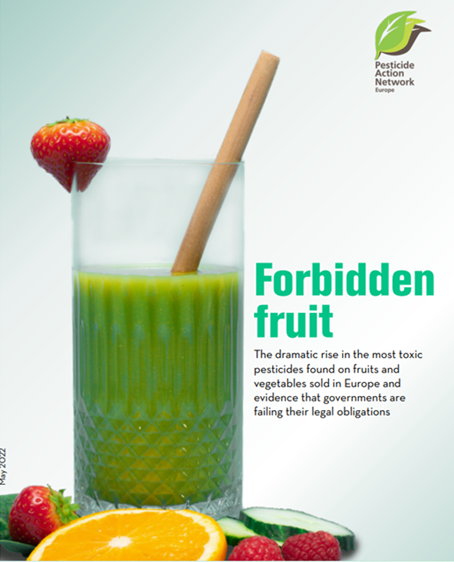 In 2009, Regulation (EC) n° 1107/2009 related to the placing of plant protection products (pesticides) on the market introduced a new category of active substances called ‘candidates for substitution’. The aim of this category is to identify the approved active substances that are most harmful to humans and the environment and to replace them with less harmful chemical and non-chemical alternatives, ultimately leading to their elimination.

Due to the toxicity of these substances, Regulation (EC) N° 1107/2009 regulates them much more strictly than other active substances. Their approval period by the EU is limited to 7 years (compared to 15 years for other pesticides) and Member States are legally obliged to give preference to less harmful alternatives when applying for authorization of a pesticide containing a candidate for substitution.

However, not only Member States failed to meet this target, but a new PAN Europe report, ‘Forbidden Fruit’, shows that European food is increasingly contaminated with these most hazardous pesticides.

Salomé Roynel of PAN Europe states : ‘These chemicals should disappear from our food. But instead, we observe a dramatic increase in exposure to these most toxic substances over the last ten years. The proportion of fruits and vegetables contaminated with these pesticides continues to rise. Often the food shows multiple residues of two or more of these toxic substances at the same time. This clearly demonstrates that the substitution rules have never been implemented by the Member States and that they have failed in their responsibility to protect consumers.’

The European Commission is currently discussing new pesticide reduction targets, to be presented on June, 22. The announced reductions fall far short of what many citizens are asking for, and the Commission is facing a very resistant agrochemical lobby, including the giants Syngenta and Bayer.

PAN Europe’s new campaign will be rolled out over the next few months in 10 Member States, including Belgium, France, Germany, Spain and the Netherlands, with the following demands :