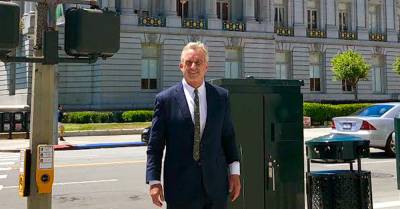 07/19/2018 : The hearings of the first legal case by a victim of Monsanto’s Roundup, Dewayne Johnson, began on July 9, with opening statements by counsel, followed by questions to experts, particularly to Dr. Christopher Portier, called by the plaintiff.
American lawyer Robert F. Kennedy, Jr. (photo) reports on these hearings, published by our partner Organic Consumers Association.

Thanks to Robert F. Kennedy, Jr. for providing a recap of the fourth and fifth day in court in the Dewayne Johnson vs. Monsanto Co. trial. Proceedings began in San Francisco Superior Court on July 9. The plaintiff, Dewayne Johnson, a 46-year-old former school groundskeeper who was diagnosed with non-Hodgkin lymphoma four years ago, claims Monsanto hid evidence that the active ingredient in its Roundup herbicide, glyphosate, caused his cancer. This is the first case to go to trial among hundreds of lawsuits alleging Roundup caused non-Hodgkin lymphoma. The trial is expected to last about a month.

Throughout Monday afternoon and Tuesday morning, July 16 and July 17, Monsanto’s attorney, Kirby Griffiths, continued his ambuscade of Plaintiff’s epidemiologist/toxicologist, Dr. Christopher Portier, probing for weaknesses in Portier’s assessment that glyphosate and Roundup are human carcinogens. Dr. Portier yielded nothing; the studies evaluating glyphosate’s carcinogenicity were performed correctly, he said, properly examined and interpreted accurately by the International Agency for Cancer Research, which determined that “glyphosate is a probable human carcinogen.” Watching Griffiths try to get a grapple hold on Dr. Portier had the aspect of a man trying to climb a greased pole. Griffiths never got his feet off the ground.

Following Griffiths’ cross, my co-counsel, Brent Wisner of Baum Hedlund Law, conducted redirect of Dr. Portier and the jury heard its first mention of Jess Rowland, the U.S. Environmental Protection Agency’s (EPA) corrupt Office of Pesticide Programs chief. Rowland orchestrated the exoneration of Roundup based principally on studies ginned up or ghostwritten by Monsanto and its army of biostitutes (After Dr. Portier stepped down, we heard additional videotaped testimony from Monsanto official, Dr. William Heydens, admitting that he had recommended “ghostwriting” EPA’s key study then edited it himself).

Under Wisner’s questioning, Dr. Portier inventoried the substantive flaws in the federal EPA’s glyphosate and non-Hodgkin’s lymphoma studies. He showed how the EPA, with Monsanto holding its coat, cherry-picked glyphosate-friendly studies to support its ruling in Monsanto’s favor. Wisner closed his redirect with Portier denouncing the Andreotti Study (2018) as fatally flawed. That study, the backbone of Monsanto’s case, concluded, with Trumponian chutzpah, that glyphosate actually protects humans against non-Hodgkin’s lymphoma. Portier showed, that, raw data buried in that study, showed a statistically significant elevated risk of T-cell lymphomas, the exact type of cancer diagnosed in our Plaintiff, Dwayne Johnson.

Our principle weakness in this case is the conclusion of the EPA’s Jess Rowland and his Office of Pesticide Programs that glyphosate is not a human carcinogen. The jury will never learn that in the 1980s, the EPA concluded that glyphosate was a carcinogen. Monsanto responded by engaging in a series of contacts with the EPA designed to intimidate the agency to withdraw those damaging findings.

Internal documents show that Monsanto recruited a paid scientist who reexamined the EPA’s mouse data and claimed to find that one key mouse study showing carcinogenicity failed to account for an unreported tumor in an unexposed mouse in the control group. As it turns out, Monsanto’s documents show that the company’s mercenary pathologist agreed to “find” the elusive cancer before he actually saw any slides. Although the EPA’s internal scientists refuted Monsanto’s hired gun, Monsanto stacked the advisory review presentations with Monsanto agents, leading to Roundup’s reclassification.

Despite this sordid history, proving that the EPA’s determination was rooted in corruption is a tricky wicket for the Plaintiff and a continuing source of frustration to our trial team. Various rulings of the court forbid us from talking about the damning historical evidence of wholesale and pervasive corruption in EPA’s pesticide office. Another ruling forbids us from mentioning California’s EPA’s decision that Roundup is a carcinogen.