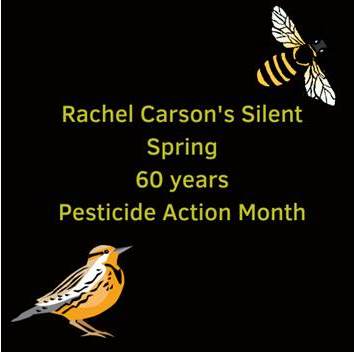 “We spray our elm trees and the following springs are silent of robin song, not because we sprayed the robins directly but because the poison traveled, step by step, through the now familiar elm-earthworm-robin cycle.”

On the occasion of the 60th anniversary of the publication of Rachel Carson‘s book Silent Spring, our partner PAN Europe is organizing from September 27 to October 27 a month of struggle against pesticides in her honor, whose program is available here.

Rachel Carson (1907-1964), the author of Silent spring, published in 1962, was an American marine biologist. The book describes a spring in which no birds would sing, because the pesticides sprayed a few months before would have exterminated them.

The initiative for the book came when the author received a letter from a Massachusetts citizen stating that DDT was killing the birds. But Rachel Carson‘s study went far beyond demonstrating the link between DDT and bird deaths. She revealed that the use of this insecticide also had an impact on the reproductive functions of the animals: in addition to the increase in mortality, the problems of reproduction and the thinning of eggshells weakened the species. Rachel Carson was the first to discover that a pesticide can directly act on the hormonal system and intrinsically modify the reproductive functions of a species. This discovery was a precursor in a world where public policies did not yet know the existence of the words “environment” and “pollution” and was fundamental in the creation of the EPA (Environmental Protection Agency) in the United States in 1970.

One of the victories of this whistleblower remains without question the banning of DDT, which occurred 10 years after the publication of the book, in 1972. This was followed by the cases of DDT victims, brought before the courts, the first lawsuits involving victims of pesticides.

Rachel Carson accused the chemical industry of practicing misinformation about pesticides and the public authorities of responding to all the demands of the chemical industry to the detriment of the protection of public health and the environment. This is unfortunately still true today, as shown by the report “Pesticide Paradise” published by our partner PAN Europe on September 27, which describes the blocking of regulatory progress on pesticides by agrochemical companies.

Sixty years after the publication of Silent Spring and the accumulation of scientific evidence of the considerable damage of pesticides on human health and the environment, it is clear that their use continues unabated.

“We’re at Peak Pesticide and Silent Spring is almost here“, PAN Europe writes in the announcement of the Rachel Carson Action Month against pesticides.