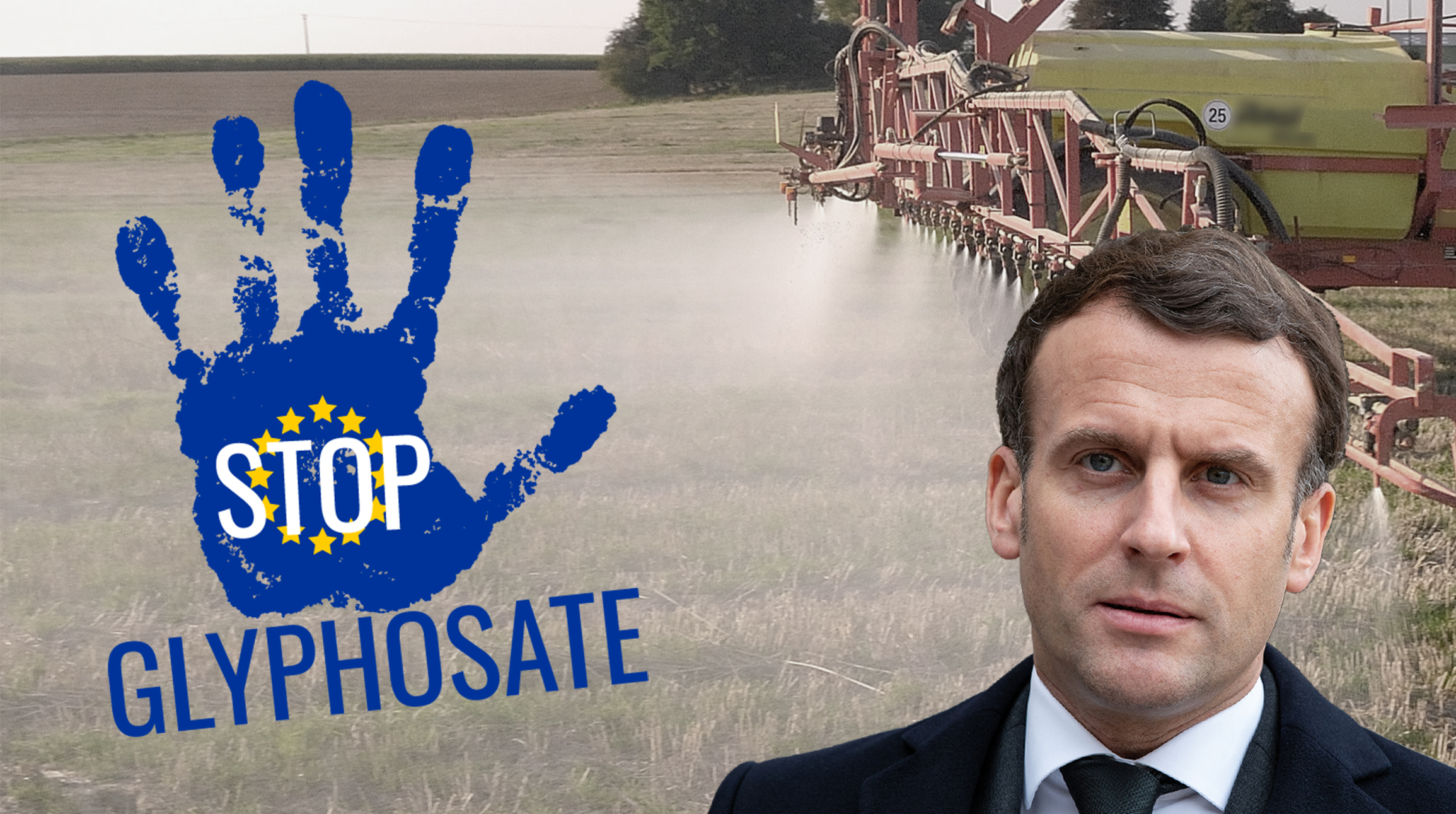 A coalition of 37 civil society organizations, including Justice Pesticides, is launching a petition today, targeting French President Emmanuel Macron to take a stand against the renewal of glyphosate authorization in the EU, which expires at the end of 2022. Debates on this issue are already raging and tensions are rising. Opinions, studies and scandals follow one another in Europe and across the Atlantic. For the groups involved in this petition, there is no more time to procrastinate: the declared active molecule of Monsanto/Bayer’s Roundup is dangerous for health, farmers and the environment. It must be banned, finally. While Emmanuel Macron had made a promise in 2017 – not met – to get out of glyphosate in France “at the latest” in three years, he has the responsibility, with the rotating French presidency of the EU in January, to get this toxic pesticide banned in Europe as early as 2023.

foodwatch, Générations Futures and 35 civil society organizations have decided to take Emmanuel Macron at his word and urge him to take action to ban glyphosate in the EU with a joint petition. On September 4 in Marseille, at the World Congress of the International Union for Conservation of Nature (IUCN), the French president firmly declared that he wanted to “carry an initiative for an accelerated exit from pesticides” during the French presidency of the European Union, which begins in a few weeks, in January 2022.

For Karine Jacquemart, Executive Director of foodwatch: “It is urgent to mobilize because it is now that everything is at stake. At the end of 2022, the authorization of glyphosate in Europe expires. Its ban should be obvious to protect human health and the environment, given the known studies, but the lobbies are doing everything to confuse the issue. We are therefore not safe from a nasty surprise and the role of France will be essential.

“The danger of glyphosate is now a given for experts who use published scientific data validated by the scientific community, such as those of IARC or Inserm. But the risk in the glyphosate reregistration dossier is that, as in the past, the European agencies may disregard these data and rely instead on studies produced by industry, which are often questionable,” warns François Veillerette, of Générations Futures.

In 2015, the International Agency for Research on Cancer (IARC), a WHO agency, had classified glyphosate as “probable carcinogen” for humans (category 2A), after a review of numerous public scientific studies. On June 30, 2021, the multidisciplinary report of the French National Institute of Health and Medical Research (Inserm) reinforced the analysis of the health risks of glyphosate.

The conclusions of credible studies such as those of the IARC or Inserm on the risks of glyphosate should de facto lead political decision-makers to protect farmers, the population and the planet by banning this substance – if only by applying the European precautionary principle.

However, the agrochemical lobby is maneuvering to try to confuse the issue of the danger of glyphosate. By providing their own opaque studies for renewal applications, the manufacturers are seeking to create doubt in order to block its ban. After the scandals of the “Monsanto papers” and copy-and-paste of industry reports by state agencies in 2017, an Austrian scientific assessment published in July 2021 demonstrated the unreliability of industry-provided studies on glyphosate.

Nevertheless, the risk of such a bias appears to be present in the evaluation of glyphosate for a decision on the renewal of its authorization, or not, in Europe after 2022. The Renewal Assessment Report (RAR) produced in June by the group of four states mandated to study this issue (France, Hungary, the Netherlands and Sweden) is indeed very worrying, suggesting that glyphosate would not be dangerous to health and opening the way to a possible renewal of the authorization of glyphosate in Europe. .

It is then the EFSA (agency in charge of risk assessment in the field of foodstuffs) and the ECHA (agency that evaluates the dangerousness of chemical substances) that will have to give their opinion, after public consultations in progress. The studies on which they will base their opinion will have to be transparent and reliable.

The coalition of 37 civil society organizations recalls that Emmanuel Macron had already promised at the end of 2017 that France would get out of glyphosate in three years – a promise not met. They will therefore not be satisfied again with grand statements, as in Marseille, but demand action. The French presidency of the Council of the European Union must be the opportunity to publicly bring this exit from glyphosate at the European level by the end of 2022.