Double standards and hazardous pesticides from Bayer and BASF, report available in 4 languages! 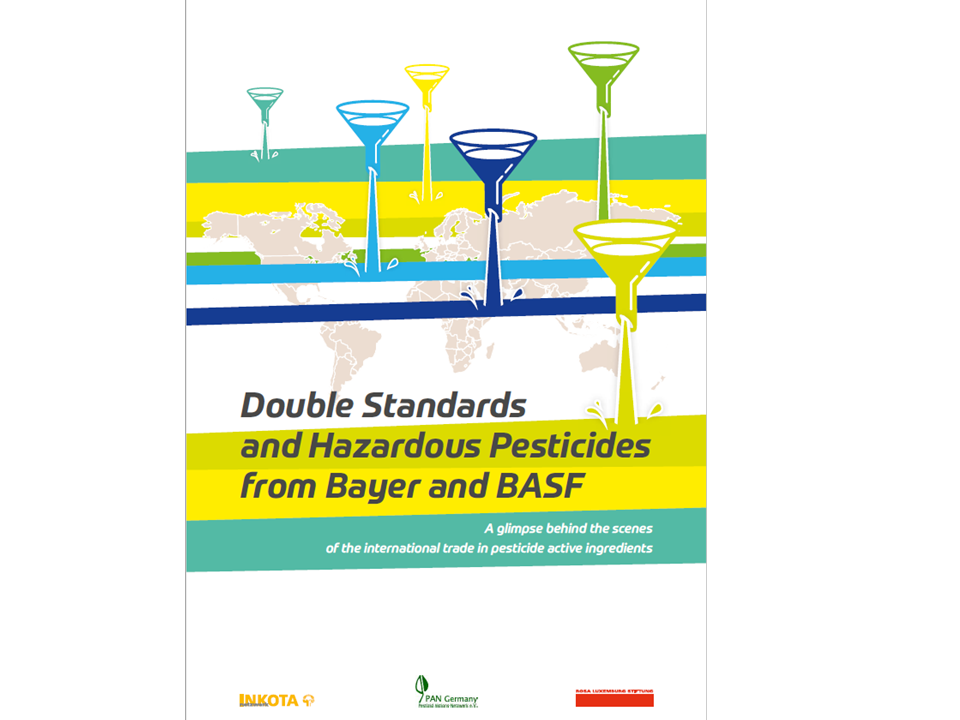 The report by PAN Germany (Pesticide Action Network), a member of our partner PAN Europe, the INKOTA network and the Rosa Luxemburg Foundation, on the shameful practice of exporting pesticides banned in Europe (double standards), published in German in April 2021, is now available in English, Spanish, and Portuguese. One of the three authors, Dr Peter Clausing, is a board member of Justice Pesticides.

The report explores the global trade in pesticide active substances banned in the European Union (EU), focusing on products marketed by the two German agrochemical giants, Bayer and BASF. It demonstrates that these two companies continue to market pesticides and active ingredients in the South that are not approved, or are even banned, in the EU because of the risks they pose to the environment or human health. These unethical business practices are legal in the EU, but are increasingly being criticized as double standards.

An attractive market for agrochemical companies

The report notes that in 2018, five of the largest agrochemical companies (Bayer, BASF, Corteva, FMC, Syngenta) made 35% of their sales with pesticides that include substances that are extremely toxic to health or the environment. According to an investigation by Public Eye and Greenpeace UK’s investigative unit, Unearthed, around 60% of sales of these dangerous products were destined for so-called developing and emerging countries.

Profits made at the expense of human health and environmental protection

The authors of the report did not obtain answers from the main factories manufacturing pesticides in Mexico and South Africa on the origin of the active ingredients of the pesticides sold on their market. The companies only claim that their products are safe if used correctly. However, this claim is far from the reality in the South. In many cases, the necessary protective equipment is either unavailable, too expensive, or impractical due to climatic conditions. In addition, some farmers cannot read or understand the information on the packaging regarding the application of the products. Pesticide manufacturers are well aware of this, but they take advantage of weak regulations in the South to make profits with highly hazardous pesticides, at the expense of humans and the environment.

What does the regulation say about the active ingredients marketed by Bayer and BASF?

To date, there are no binding regulations to prevent the export of these banned active ingredients within the European Union. Regulation 649/2012 of July 4, 2012 allows the export of certain pesticide active ingredients if the importing countries are informed and agree to import them. On October 14, 2020, the European Commission adopted the EU Chemicals Sustainability Strategy, which calls for a ban on the export of chemicals banned in the EU, but without specifying the type of chemicals or a timeline. On November 5, 2020, more than 70 European and international NGOs, including Justice Pesticides, wrote to the European Commission to end the practice of exporting pesticides banned within the EU to countries in the South. In its December 9, 2021 response, the EU Commission reaffirmed its intention to end the practice of double standards, but was not very specific. In the EU, only France has a national law that provides for a ban on the export of pesticides banned in France from 2022. When petitioned by the agrochemicals lobby, which considered that the ban on the export of certain pesticides containing active substances not approved by the EU would be contrary to the freedom of enterprise, the Constitutional Council ruled that the law was in conformity with the Constitution and that the legislator had ensured a balanced reconciliation between the freedom of enterprise and the constitutional objectives of environmental and health protection. Other European countries, including Germany, may adopt similar provisions.

The need for greater transparency and regulation

The report’s conclusions are clear: the global pesticide market is cruelly lacking in transparency. In the absence of clear regulations, companies too often hide behind commercial secrecy. A ban on the export of active ingredients classified as hazardous is necessary and international regulation of the pesticide trade must be strengthened. The establishment of a list of pesticide active ingredients classified as hazardous by the WHO and the FAO (Food and Agriculture Organization of the United Nations) could form the basis for binding regulations at the international level.