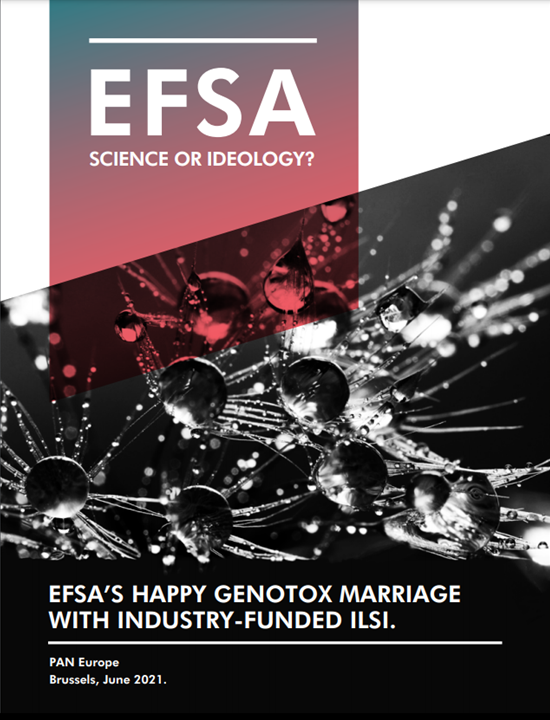 On UN Food Safety Day (June 7, 2021), our partner PAN-EU published its latest report EFSA: Science or Ideology. The report scrutinizes the authorization process of 12 allegedly genotoxic pesticides assessed by the European Food Safety Authority (EFSA) since 2006. It reveals that EFSA ignored known cancer risks and circumvented the 2009 regulation to give the green light to these 12 pesticides. It shows that the links between EFSA and industry-related experts and lobbyists, and their increasing presence in pesticide assessment committees, are responsible for these dubious authorizations.

Brussels, 7th June 2021 – Ignoring cancer risks, a family of unstable pesticides was given flawed approval by a controversial EU food safety agency, according to our new report ‘EFSA, Science or Ideology?’. The substances could help explain rising rates of breast and prostate cancer.

Pesticides can cause cancer and other serious diseases, even in small amounts. In 2009, the EU passed landmark rules(link is external) to prevent all human contact with pesticides found to be carcinogenic, mutagenic, reprotoxic, endocrine disrupting or other harms.

But a family of unstable pesticides that are known or are suspected to produce cancer-causing by-products are being widely used in Europe after flawed clearance by the EU Food Safety Agency, EFSA, according to a report published on World Food Safety Day(link is external).

The new report ‘EFSA, Science or Ideology’ by the Pesticide Action Network (PAN) checked the approval process of the family of 12 suspected genotoxic pesticides cleared by EFSA since 2006. It found that the agency side-lined evidence of cancer risk and bent the 2009 law to give a green light to all 12. Chronic uncontrolled public exposure to these substances could be harmful even at low dose, PAN warned.

Acting without the usual political instructions from the European Commission, EFSA adopted policies designed to ignore the toxic by-products. Laboratory tests ordered by the agency showed the by-products were causing gene damage that could lead to cancer and other harms. Unusually, the agency blocked final stage animal tests and declared the pesticides safe. Without scientific references it argued that low doses were acceptable, a decision that contradicts the zero exposure principle central to the 2009 law. One of the policies was copy-pasted from an industry position paper, the PAN review shows, while others were designed by chemical industry lobbyists, industry linked experts or individuals with a history of supporting industry interests. These individuals dominated EFSA panels that paved the way for the 12 pesticide approvals, thought to be worth hundreds of millions(link is external) of Euros in annual sales. The PAN review confirms EFSA management is still today dominated by individuals with an industry background.

The agency is required by law to act on new scientific findings. But it has dismissed all submissions by top-level independent scientists belonging to the respected Endocrine Society(link is external). In February, the society warned (link is external)EFSA of substantial mistakes and a failure to reflect scientific opinion in favour of a decades-old approach. It was again ignored.

The agency’s actions amount to an ideology that minimises risks and ignores critical evidence by independent scientists in order to favour commercial interests, PAN said.

PAN Health and Environment Policy Officer Martin Dermine said: “Our report shows that the twelve pesticides are not proven safe. That means food and animal feed is contaminated with substances with an unacceptably high risk of serious health impacts. EFSA is supposed to be a neutral player, the finest minds taking on board the latest scientific research to best assess risk and protect us from harm. Instead, we see an unreliable organisation riven with commercial interests writing its own rules to help get some of the most worrying pesticides onto the market and onto our plates. Prostate and breast cancer rates have been rising over roughly the same time period. It is always hard to draw accurate connections, but genotoxic and endocrine disrupting pesticides are a prime candidate. The 12 pesticides should be retested urgently by a trustworthy body.”

The by-products include category 1 carcinogen Hydrazine, found in pesticide Maleic Hydrazide, used on onions, potatoes, carrots and as a general herbicide. Another is the category 2 mutagen and carcinogen Anilin, found in the insecticide Buprofezin, used on flowers.