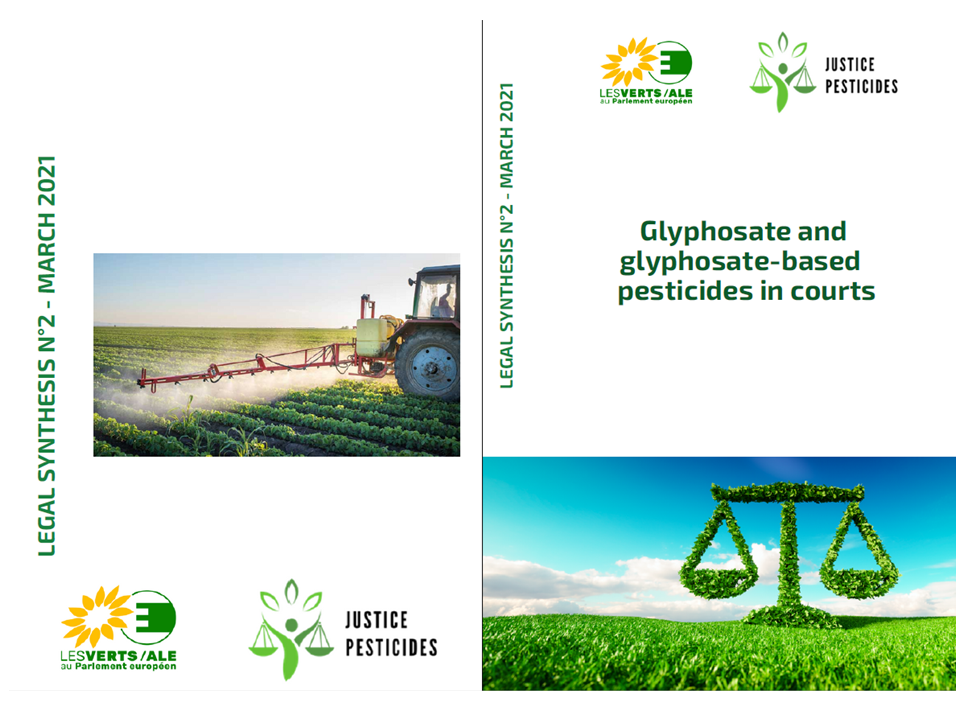 Justice Pesticides has produced a summary of court cases involving glyphosate and glyphosate-based herbicides (GBH) in Europe and worldwide, thanks to the financial support of the Greens/EFA group in the European Parliament. This study, the second of the group after “Neonicotinoids in courts“, was presented on March 24, 2021 by its Chair, Corinne LEPAGE, during a webinar organized by Green MEPs Claude GRUFFAT (FR) and Thomas WAITZ (AU) in the framework of the Week of Alternatives to Pesticides (SPAP)

GBHs are the best-selling pesticides in the world. Their huge success is linked to the development of GMOs, their very low price since the patent expired in 2000 and their properties as total and systemic herbicides.

For many years, GBHs have been accused of being dangerous to human health. In 2015, the International Agency for Research on Cancer (IARC) classified glyphosate as genotoxic and a “probable carcinogen.” More than 125,000 U.S. Roundup users have filed complaints after contracting non-Hodgkin’s lymphoma (NHL).

GBHs are also harmful to the environment. They are total herbicides, which kill all plants and turn treated plots into true deserts, from which all weeds have been wiped out. They deprive a whole fauna of insects, birds and mammals of their food and prevent pollinators from carrying out their mission. They alter soil quality because AMPA, the degradation product of glyphosate, is toxic, not soluble in water and can remain in the soil for a long time.

Justice Pesticides collects all pesticide-related litigation worldwide on a free public database in order to strengthen the defense of victims of pesticides.

Given their massive use and their dangerousness, GBHs generate a great number of litigation in courts. They account for one third (134 cases) of the nearly 400 court cases listed and summarized in Justice Pesticides’ database, for 14 countries, plus the European Union and a case at the International Court of Justice.

The coming period represents a major challenge for glyphosate. Indeed, the approval period for this herbicide in the European Union runs until 2022. The Commission will prepare a proposal for renewal -or non-renewal-, which will be submitted to a vote of experts from the member states before the end of 2022. In addition, the Court of Justice of the EU (CJEU), referred by a French court to 4 preliminary questions concerning the EU approval of glyphosate, issued on October 1, 2019 a very important decision that could call into question all EU marketing authorizations for pesticides, as it provided essential clarifications and interpretations on the EU regulation, which clearly show that the evaluation procedures are never correctly applied by the EU authorities.

In the United States, the courts have definitively made the link between GBHs and NHL in three resounding and spectacular decisions with required damages up to 2 billion dollars. In each case, the juries considered that Roundup was the probable cause of the plaintiffs’ disease and pointed to the “malice” of Monsanto company.  Faced with the considerable number of complaints and the results of the first three trials, Bayer (now owner of Monsanto) proposed an $11 billion settlement, to  resolve the current litigation and another §2 billion settlement for future cases. Glyphosate may not recover from the amount of money Bayer must set aside to deal with its ill-fated purchase of Monsanto.

In many countries, the issue of banning glyphosate and GBHs is becoming a pressing one. A glyphosate-free future is within our reach.

Claude Gruffat says: “Few molecules have been in the news as much as glyphosate, whose danger to the environment and humans is confirmed day after day. Its massive use by the current productivist farmers justifies all the more the absolute urgency of its ban which must be accompanied by changes in more agro-ecological practices.”