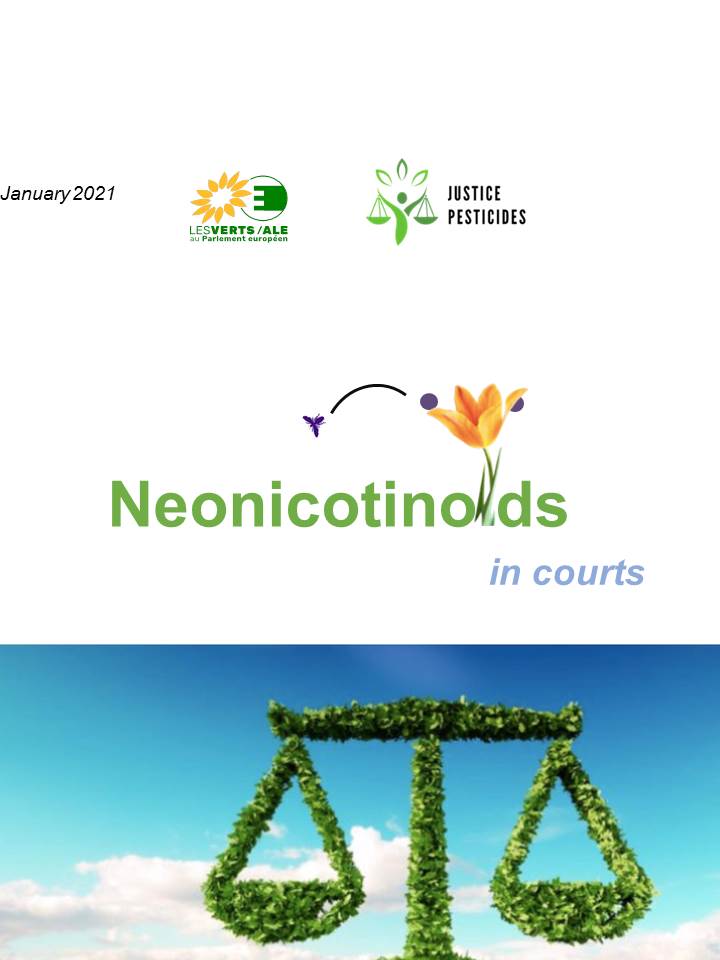 March 9, 2021: Justice Pesticides has produced, with the financial support of the Greens/EFA group in the European Parliament, a summary of court cases involving neonicotinoid pesticides in Europe and around the world.

Widely used since the 1980s and 1990s, neonicotinoids are extremely toxic insecticides in infinitesimal doses. In spite of their danger to the environment and living species, documented as soon as they were put on the market, it took two decades before the first prohibition measures appeared, particularly in the European Union, and they continue to be used massively on all continents, generating legal action, both by environmental associations and beekeepers to prevent their use, and by agrochemical companies to challenge their prohibition or the limits on their use.

Justice Pesticides collects all litigation concerning pesticides in the world on a public and free database in order to strengthen the means of defense of pesticide victims.

On the occasion of a webinar organized by Claude GRUFFAT, MEP of the Greens/EFA group in the European Parliament on January 27, 2021, Corinne LEPAGE, Chair of Justice Pesticides, presented a detailed study of the association, carried out thanks to the financial support of the Greens/EFA group, which shows the contradictions in case law used to continue using these bee-killing pesticides, which have been banned in the EU since 2018.

Claude GRUFFAT, a member of the European Parliament’s Committee on Agricultural, states: “How can we ask citizens to join the European project if it is not built in their interest and attuned to their needs? MEPs voted to ban this devastating molecule for pollinators and especially for bees, sentinels of biodiversity. Alternatives exist and it is unacceptable that, with exemptions and because of the cowardice of some in the face of productivist agricultural lobbies, this poison continues to prevail. This is why I invite you to sign en masse the European Citizens’ Initiative “Save the bees and the farmers” which will hopefully bring everyone back to reason. »

Justice Pesticides database lists and summarizes nearly 400 court cases, more than 10% of which specifically concern neonicotinoids. Of these, 33 are European cases and 11 American cases.

The Court of Justice of the European Union (CJEU) has ruled twice on the subject of neonicotinoids, and each time validated their prohibition.

However, in France, administrative judges, asked by beekeepers or the industry, have handed down contradictory decisions concerning marketing authorizations for neonicotinoids. The Constitutional Council has just validated the law authorizing the return of neonicotinoids, even though it had previously validated their prohibition from 2018. The derogation from the ban on Gaucho, on the other hand, has been cancelled in Sweden, while the derogations from the ban on 6 neonicotinoids have been validated in Belgium.

In America, disputes relating to neonicotinoids are less successful than in Europe. In Canada, judges have just affirmed the possibility for environmental protection groups to act against a marketing authorization. In the United States, the decisions are more about violations of procedural marketing rules. Finally, in Latin America, there is still a debate in the courts about the dangerousness of neonicotinoids.

Corinne Lepage concludes: “It emerges from this brochure that despite the dangers associated with neonicotinoids, which have been proven over the past two decades, judges often find themselves unable to have them banned due to insufficient regulation. The multiplication of litigation, which increasingly exposes the shortcomings of regulations to effectively protect the environment and the health of consumers, should serve as an alarm to make legislation evolve in this direction and no longer leave room for ambiguity.”