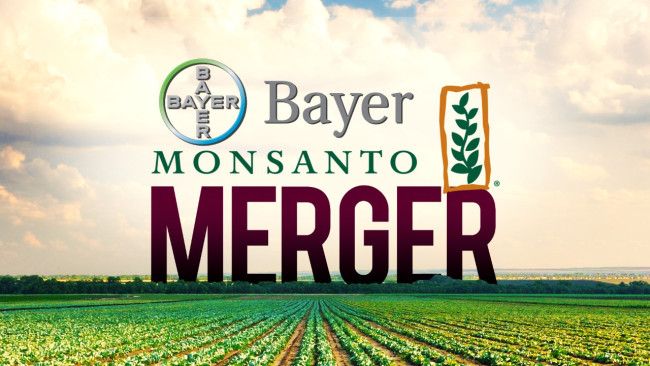 On March 21srt 2018, the European Commission cleared the conditional acquisition of Monsanto (USA) by Bayer (Germany). To avoid monopolies, Bayer has undertaken to sell its seeds, GMOs and part of its pesticides division. These sectors should be acquired by another German multinational, BASF, subject to the Commission’s agreement.

Our partner’s article Inf’OGM sheds light on this spectacular and dangerous merger..:

The European Commission announced “that it has decided to conditionally approve Bayer’s proposed acquisition of Monsanto”. According to Margrethe Vestager, European Commissioner for Competition, the new entity will be “the most important global player on seeds and pesticides”.

Following the takeover, the Commission feared a significant reduction of competition in seeds and pesticides. But the negotiations with Bayer over the last few months have satisfied the Commission: “The remedies proposed by the parties, which far exceed €6 billion, fully address our competition concerns. Our decisions ensure that competition and innovation will remain effective in the seed, pesticide and digital agriculture markets, even after this merger.

Commissioner Margrethe Vestager said: “We have ensured that the number of global players actively competing in these markets remains the same. This is important because we need competition so that farmers can choose between different varieties of seeds and pesticides at affordable prices. And we also need competition to encourage businesses to innovate in digital agriculture and to continue to develop new products that meet Europe’s high regulatory standards for the benefit of all Europeans and the environment.

As far as seeds are concerned, Bayer and Monsanto compete in Europe on the vegetable seed (tomato or cucumber) markets. According to the European Commission’s investigation, Monsanto is the world’s largest supplier of vegetable seeds with its Seminis and De Ruiter brands, while Bayer is currently the fourth largest supplier in the sector with its Nunhems brand.

Thus, “Bayer has undertaken to divest its entire vegetable seeds business, including its R&D (research and development) organisation, to a suitable purchaser not currently active in this field”. Although no purchaser name is mentioned in the commitments, Bayer has since offered BASF as purchaser. The notification of the divestiture of these activities was published at EU JO on 14 March.

These two companies are also competitors in rapeseed and cotton seed and the development and licensing of genetic modifications (tolerance to certain herbicides: Roundup Ready for Monsanto and Liberty Link for Bayer, and insecticide production). Again, “Bayer has undertaken to divest almost all of its worldwide field seeds and field crop traits business, including its R&D organisation, to BASF. (…) It would also cover Bayer’s entire trait business, including its R&D activities on genetically modified and non-GM traits.

For the Commission, these divestments will allow the purchasers “to replicate the competitive pressure previously exerted by Bayer on Monsanto and would ensure that the number of global players in vegetable seed research and development remains the same”. The Commission states that this “would also maintain the current number of four global integrated players in the field of traits (editor’s note: genetic modification) (with DowDuPont and Syngenta) and six the current number of global integrated players in the field seeds sector (with DowDuPont, Syngenta, KWS and Limagrain)”.

Further concessions have been made in the area of pesticides and digital agriculture. It’s BASF again, so another German, who benefits from the disposals in pesticides… Finally, Bayer also undertook to grant BASF “a licence to a copy of its current global digital agriculture offering and products under development”.

The Commission states that “at first sight BASF appears to be an appropriate purchaser because the fact that it does not currently sell seeds or non-selective herbicides means that horizontal overlaps in these areas are limited. In addition, BASF has a global complementary pesticide business and the financial strength to compete. The responses to the consultation with competitors and customers were largely positive as regards BASF’s suitability as a purchaser. However, an investigation has been opened by the Commission and “Bayer will only be able to proceed with the acquisition of Monsanto once the Commission has formally assessed and approved the final sale of the asset package to BASF”.

With all these precautions to avoid monopolies, one can wonder about the real motivations of this acquisition (where are the economies of scale?), and on the veracity of the competition, in the long run, between the two German giants… To what extent are BASF and Bayer truly independent entities, given that the first shareholders of one are also the first shareholders of the other, such as The Vanguard Group, Inc. which holds 2,5 % of the shares of Bayer and BASF, or Norges Bank Investment Management which holds 2,07 % of the shares of Bayer and 2,99 % of those of BASF? The Vanguard Group, Inc. is also a significant shareholder of Monsanto.

Many farmers’, environmental and development organizations had expressed fear about the merger. The Commission kicked in the teeth, stressing that “these concerns (…) relate to European and national rules aimed at protecting food safety, consumers, the environment and the climate[and that] although these concerns are of great importance, they cannot form the basis for assessing a concentration”.