1st day of hearings in the multi-district litigation against Monsanto 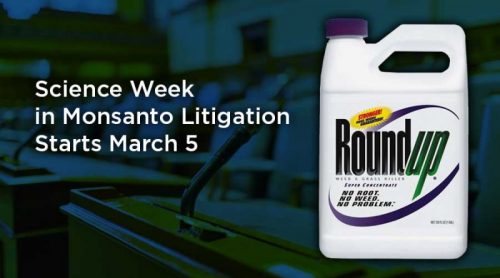 Carey Gillam, research director at US Right To Know (USRTK) and Justice Pesticides’ board member, attends the hearings and reports live on https://usrtk.org/live-updates-monsanto-hearing/

03.05.2018 Today the hearings of the plaintiffs’ witnesses began. Dr. Beate Ritz is the Chair of the Epidemiology Department at UCLA, which is one of only a few positions specifically assigned to the Center of Occupational and Environmental Health (COEH) mandated by the State of California to conduct research, teaching and service to communities in California on occupational and environmental health issues; Dr. Dennis Weisenburger is Chair of the Pathology Department of the City of Hope Medical Center. He specializes in the studies of the hematopoietic and immune systems, with a special interest in NHL that has spanned nearly 40 years. His study of the pathological mechanisms by which NHL develops began in the 1980s when he was directing large epidemiologic studies related to NHL; Dr. Alfred Neugut is a practicing medical oncologist, a Professor of Cancer Research and Professor of Medicine and Epidemiology at Columbia University, and Associate Director for Population Sciences for the Herbert Irving Comprehensive Cancer Center; Dr. Charles Jameson completed a Ph.D. in Organic Chemistry in 1975 at the University of Maryland. He has worked for National Institutes of Health’s National Cancer Institute (NCI) as a senior chemist for the NCI’s Rodent Bioassay Program where he served as chief chemist, directing all chemistry activities and participating in the development of all two-year rodent bioassays while also serving as secretary for the NCI’s Chemical Selection Working Group; Dr. Christopher Portier received his PhD in Biostatistics from the University of North Carolina, Chapel Hill, in 1981. For over 32 years, Dr. Portier held prominent leadership positions with the federal government that combined the disciplines of toxicology, statistics and epidemiology, including: Associate Director of the National Institute of Environmental Health Sciences (NIEHS) National Toxicology Program and thus the nation’s chief toxicologist, among other roles at NIEHS, Director of the National Center for Environmental Health, Center for Disease and Prevention, Director of the Agency for Toxic Substances and Disease Registry (ATSDR); Dr. Chadi Nabhan is a board-certified clinical medical oncologist and past Assistant Professor of Medicine at the University of Chicago. Currently, Dr. Nabhan serves as Medical Director of Cardinal Health. His clinical practice and academic research for the past 17 years has focused on lymphomas. By videotape deposition testimony, Dr. Aaron Blair and Dr. Matthew Ross. Dr. Aaron Blair is a Scientist Emeritus at the National Cancer Institute Division of Cancer Epidemiology & Genetics, Occupational and Environmental Epidemiology Branch. He is a lead investigator of the Agricultural Health Study and the Overall Chair of the IARC 112 working group. Dr. Blair explained at his deposition how he weighed the totality of the epidemiology studies to support his opinion that glyphosate is a probable human carcinogen; Dr. Matthew Ross is an Associate Professor at the College of Veterinary Medicine, at Mississippi State University. He has a Ph.D. in Molecular Biology and expertise on the impact of environmental toxins on signal transduction pathways in cells. He was a part of the mechanism section of the IARC 112 working group. Dr. Ross explains why the strong evidence that glyphosate is genotoxic and causes oxidative stress are relevant to carcinogenicity in humans.

Carey Gillam reports: A long day of testimony presented by plaintiffs’ witnesses concluded with strong statements by NHL expert Dennis Weisenburger laying out multiple studies that lend support to the plaintiffs’ allegations that Monsanto’s glyphosate-based Roundup herbicide causes non-Hodgkin lymphoma.
As he did with prior witness Beate Ritz, the judge asked Weisenburger if he believed not just that the pesticide was capable of causing NHL but if it is at exposures people are currently experiencing. Weisenburger answered affirmatively.
“The body of evidence is strong evidence,” said Weisenburger. Glyphosate and the glyphosate-based formulations, including Roundup can cause non-Hodgkin lymphoma (NHL), he told Judge Chhabria.
Weisenburger spent time walking the court through studies that show DNA damage in people exposed to glyphosate, including through aerial spraying. Research shows that both glyphosate and formulations cause genetic damage, the type that leads to NHL, he said.
“There is biological plausibility.”
He testified that both animal studies and studies of human exposed to glyphosate showed connections between the chemical and cancer.
In one study, the North American Pooled Project (NAPP) the risk for NHL increased almost two fold when for people who used glyphosate more than two days per year. In animal studies, Weisenburger said there were “dose-related effects for multiple tumors.” As well, one mouse study showed rare tumors in exposed animals.
“There is a body of evidence that is pretty compelling that glyphosate and the formulations are genotoxic in living cells,” he testified.
Like Ritz, Weisenburger was dismissive of new results recently published as part of the Agricultural Health Study that showed no connection between glyphosate and NHL.
Though Monsanto has sought to portray this research as definitive evidence of no relationship between cancer and its weed killer, both scientists who testified today said the research has several flaws that made it unreliable for a determination on glyphosate, including that its span was too short, recall bias concerns, and lack of actual data on increased glyphosate usage over years.
Monsanto’s attorneys will get their chance to cross examine Weisenburger on Tuesday, March 6.