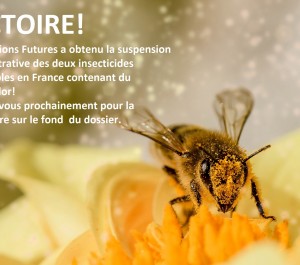 Press release from Générations Futures, the organization that brought a legal action against the authorization of two sulfoxaflor insecticides.

Sulfoxaflor: Marketing authorizations for Closer and Transform insecticides are suspended!

Our lawyer Maître Lafforgue represented us yesterday, November 23, in the hearing before the administrative court of Nice following our application for emergency suspension of the marketing authorizations of the neonicotinoid insecticides Closer and Transform containing sulfoxaflor. Arguing against him were no less than 2 lawyers for the firm Dow Chemical, 2 of its representatives and 3 representatives of ANSES.

The magistrate has just given his deliberations and requests the suspension of the two insecticides pending the judgment on the full review of the case. Dow and ANSES have 15 days to appeal this ruling to the Council of State.

The two targeted pesticides, Transform and Closer, are used to treat aphids in field crops, fruits and vegetables with the active ingredient sulfoxaflor. They are recommended by the manufacturer to be applied at a single dose per year, and not less than five days before flowering. In his arguments, our lawyer pointed out rightly that – in addition to the dangers of these insecticides to pollinators – the weaknesses of the implementation of this recommendation of treatment not to be applied less than 5 days before flowering. How is it possible to accurately assess this flowering date of the target crops? In addition, what sense does it make for the marketing of pesticides based on new neonicotinoids, when a 2016 law provides for the ban of neonicotinoid-based pesticides?

“Our organization welcomes this first victory which will provide a respite for pollinators in general and bees in particular. It is high time that we really stop putting on the market all neonicotinoid insecticides that are so dangerous for bees!” said François Veillerette, Director of Générations Futures. “This file also reveals a scandalous situation concerning the management of European approvals of active pesticide ingredients that are granted in the absence of essential data on the safety of products, called confirmatory data, and which will only be available 2 years later! This situation must stop as soon as possible and we call on the French Ministers that are involved in pesticides issues to act quickly on this. We are now waiting for the procedural hearings on the substance that we have initiated, the date of which is not known to us yet”, he added.

Read ANSES’ reaction to the announcement of the judgment, in French.