Roundup against its judges, the new book by Marie-Monique Robin 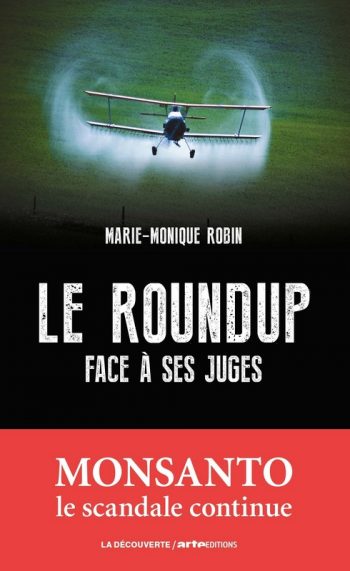 In bookstores from October 19, the new book by Marie-Monique Robin (in French).

For several years, there has been growing concern about the dangers of the world’s most widely used pesticide in fields and gardens: glyphosate. Especially, since in 2015 the International Agency for Research on Cancer has declared it a “probable carcinogen” for humans, contradicting the American and European health agencies that had ensured the safety of Monsanto’s Roundup, a powerful herbicide whose active ingredient is glyphosate.

Expanding on her 2008 investigative work on the dangers of toxic products from the American firm (The World According to Monsanto, book and film), Marie-Monique Robin shows in this book (and the associated film) that the hazards of glyphosate is even greater than we believed. Throughout the world, it renders sick, or kills soil, plants, animals and humans, because the herbicide is everywhere: in water, the air, rain, soil and food. This carcinogenic product is also an endocrine disruptor, a potent biocide and a metal chelator. Many deleterious effects are documented in the book through very powerful interviews with victims in the United States, Argentina, France and Sri Lanka, as well as with many scientists.

This alarming exposé reveals one of the greatest health and environmental scandals in modern history. It shows that, faced with the powerlessness or the unwillingness of agencies and governments to put an end to it, global civil society has mobilized. In October 2016, the International Tribunal on Monsanto was held in The Hague, where judges and victims conducted the trial of Roundup, in the absence of Monsanto, which refused to participate. Giving its lead to this book, the trial led to a very well-argued legal opinion, which could help recognize the crime of “ecocide”, and allow the criminal prosecution of the leaders of the corporations responsible.

The author, Marie-Monique Robin, journalist and director is a member of the Board of Justice Pesticides. She is a winner of the Prix Albert-Londres (1995). She has directed numerous documentaries, been awarded some thirty international awards, and produced reports and documentaries made in Latin America, Africa, Europe and Asia. She is also the author of several books, including Organ Thieves, Investigation of Trafficking (Bayard), The 100 photos of the Century (Le Chêne/Taschen), The Sixth Sense, Science and Paranormal (Le Chêne), 100 photos of the 21st century (La Martinière). At La Découverte, she has already published: Death Squads, the French School (2004, 2008), The School of Suspicion (2006) and, co-published with Arte-Editions, the bestseller The World According to Monsanto (2008, 2009), Our Daily Poison (2011), The Harvests of the Future (2013) and Sacred Growth! (2015).